A day does not go by when someone doesn't ask about why their Maltese makes these sounds like they can't breathe. In most cases this is usually caused by what I would call reverse sneezing. I've seen it happen primarily when excited. I have heard of others Maltese that will do this after drinking or eating, after running around, or while pulling on the leash.

It seems to me what is happening here is that the pharynx goes into spasms. Usually, by gently rubbing the throat of your Maltese, the spasms will stop after they swallow a couple of times and thats the end of it. On others, taking them outside for some fresh air will quickly cause the wheezing, snorting and honking to cease within less than a minute.

From the many Maltese people I speak to, I have found it to be extremely common in the Maltese breed and after speaking to several vets, have come to the conclusion that it is a harmless condition and medical attention is not necessary for reverse sneezing. It is very important though not to confuse reverse sneezing with a collapsing trachea.

The trachea, also known as the windpipe, is an important structure which connects the throat to the lungs. It serves the purpose of directing air into the respiratory tract.

The normal trachea is tubular. It maintains its shape because of a series of rings made of cartilage. These rings do not completely encircle the trachea. Instead, they go from the 2 o'clock to 10 o'clock positions. The remainder of the trachea is composed of a flexible membrane that joins the ends of the cartilage rings.

When the cartilage rings are flattened from the top to the bottom, the trachea is said to be collapsed. Rapid inhalation of air can cause the trachea to flatten and make it difficult for air to enter the lungs. 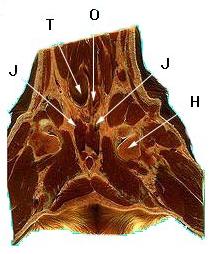 This is in the region of the thoracic inlet.

The trachea (T) lies centrally with the oesophagus (O) a thick muscular tube to the R . The jugular veins (J) lie immediately below, slanting obliquely down into the thorax.

Bony landmarks include the sternum and first ribs (ventral) and the pectoral articulation of the humerus with the scapula on either side (H).

Why does it happen?
Most "experts" do not completely understand how this condition develops. However, they know that these dogs have an abnormality in the chemical makeup of their tracheal rings. The rings lose their stiffness so they are not able to retain their circular shape. They also know that it occurs in certain breeds of dogs, notably Chihuahuas, Pomeranians, Shih Tzus, Lhasa Apsos, Toy Poodles, Yorkies, and Maltese. Because of that, they suspect that there is a genetic factor involved.

What are the clinical signs?

The most common clinical sign is a chronic cough. It is often described as dry and harsh and can become quite pronounced. The term "goose honk" is often used to describe it. Coughing is often worse in the daytime and much less at night. The cough may also begin due to excitement, pressure on the trachea (from a leash), or from drinking water or eating.

How to distinguish reverse sneezing from collapsed trachea?

A chronic cough, especially a "goose honk," should be suspected as having collapsed trachea. Many times, very light pressure placed on the trachea during the physical examination can raise a suspicion of collapsed trachea in a Maltese with a persistent dry cough. While the information gained from the physical examination is helpful, other tests are needed to confirm this condition.

Radiographs (x-rays) of the chest can identify the trachea and its shape. However, a collapsed trachea changes its diameter during the respiratory cycle. It is usually collapsed during inhalation and normal during exhalation. Therefore, an attempt to make radiographs during both phases of respiration in necessary. This can be rather difficult to accomplish since dogs are not likely to understand the command, "Take a deep breath and hold it."

Endoscopy is another way to evaluate the trachea. An endoscope is a tube that is small enough to insert into the trachea; the operator can see through it and visualize the inside of the trachea. By watching the trachea during inspiration and expiration, abnormal collapsing can be seen. Tracheal endoscopes are expensive and not available at every veterinary hospital, so unfortunately, it may require a bit of searching to find someone to perform this test.

Many Maltese with collapsed trachea could also have heart disease

Testing that occurs when diagnosing this disease should include chest radiographs (x-rays) so the heart can be evaluated. Treatment for heart disease is not indicated unless it can be demonstrated with some form of testing.

Can a collasped trachea be treated?

Collapsed trachea can be treated medically or surgically. Some Maltese respond well to bronchodilators and various types of anti-inflammatory drugs. The trachea of these dogs is easily infected, so antibiotics are usually part of the treatment. If obesity is present, weight loss is often beneficial. Excitement and vigorous exercise are likely to cause a relapse, so they should be avoided as much as possible.

Some Maltese may respond well to the medical approach, and others do not. Because medical therapy only treats the symptoms and does not correct the problem, these dogs are always subject to recurrences of coughing and breathing difficulty.

If medical therapy is not successful, the Maltese should be evaluated for possible surgery. Radiographs and endoscopy are used to determine how much of the trachea is collapsed. If the only abnormal part is that segment between the throat and the point where the trachea enters the chest (the thoracic inlet), surgery may be curative. However, if the segment of the trachea that is within the chest cavity is abnormal, surgery is not likely to be helpful because that part is not accessible to the surgeon.

There are several surgical approaches that have been used. Each approach implants an artificial support device that is secured around or within the trachea. The purpose of the support device is to hold the tracheal rings in their normal, open position. Although some Maltese have excellent results and are truly cured of the disease, the outcome is usually not always successful.

Giving a bronchodilator regularly, reducing weight in obese dogs, and maintaining a low-stress environment works well for many Maltese dogs with uncomplicated "collapsing tracheas." If your Maltese has no other heart or lung problems and is not obese, and if your veterinarian concurs, you could try a bronchodilator such as aminophylline or theophylline to keep the bronchial tubes open in extreme cases that are affecting the lungs. You could also consider a mild, low-dose sedative as prescribed by your veterinarian during stressful periods. Many Maltese with collapsing trachea have lived happily into their teens.

I don't know. It may or may not be. Not enough research that I am aware of has been done to say either way. I would therefore not breed a Maltese who is known to have this condition.

Maltese Only created by Jay Bianco
©1996-2021 All Rights Reserved